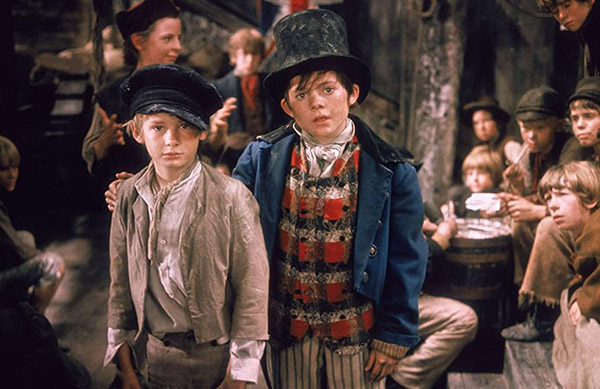 Grateful Blog: Day 65: I met a woman at her front door today and she opened the door, warmly invited me in and said ‘Consider yourself at home!’ I said ‘Thanks!’, walked in and then something deep, deep, deeeeeeeeep, DEEEEEEEEEEEEEP in the recesses of my sleepy Monday morning brain started kicking in and I reflexively started singing to myself, every so softly at first:

It took me a few seconds to even realize I was singing as I was measuring and writing things down. And then the next verse wandered in:

I thought ‘My GOD, what the heck is THAT song from???

It took me a bit. But then I remembered. Was I 6? 7? 8? I don’t recall. It was the beginning of summer and my next door neighbor Andy Cup came over and said “Hey, some of us are going to be in a play this summer called ‘Oliver’ and they need kids to play the part of Fagan’s boys. We’d be thieves!” Me and my brother Gerard we’re definitely ‘In’ for that sort of adventure.

Every day we went down to the local (Irondequoit) high school and practiced. Or mostly we watched the main cast member’s practice. We bought cokes from the machine and rolled them for hundreds of yard in the high school halls and then opened them up—the winner was the one with the highest spraying fountain and the least left in those mercilessly shaken cans. Just thinking about it seems even dumber now than what it was then.

Occasionally they hustled us kids up on stage and we learned how to ‘steal’ this and that (Hey, it was our part!) and we learned the classic songs in ‘Oliver’: ‘Food Glorious Food’, ‘I’d Do Anything’, ‘Be Back Soon’ and of course ‘Oliver’. Even at my age I had a SERIOUS crush onNancy, she was probably 16 or 18 I don’t remember. What I do remember was getting to dress ‘up’ like bums: charcoal on our face, ragged clothes, and fingerless gloves. And then the other intoxicating things: backstage, all those weights and ropes, secret staircases, the black, creaky wooden stage and the mysterious backstage passageways.

And I remember the buzz of opening night. Oh man was it something. No matter how many times you rehearse or see someone do it, doing it in front of a full theater with seemingly every eye on you was special indeed. And the after party in the gymnasium? Wow!!! Everyone still in costume but suddenly transformed into stars, still buzzing with the opening night energy. I was so young I’m sure I’ve idealized a fair bit of it. It might have been painful to watch, I don’t know. I thought it was great, the practice, the songs, the people, the work, the boredom, the rolling Coca Cola’s, the whole shebang. It WAS Adventure for an entire summer.

So it really threw me this morning, when 35 years later I was singing ‘Consider Yourself’ word for word, not trusting that I remembered the words correctly but having no reason not to. I just started singing and the words came back to me. That summer was really special. Heck, most if not all of my childhood was pretty special. It was easy, it was generally uneventful and it was fun. And it’s full of all sorts of memories.

And mostly it was un-dramatic, but that one summer, when I was a thief, one of Fagan’s Boy’s in ‘Oliver’, it was anything but un-dramatic.I’m Grateful Mom let us do that (I have no idea why—it was ripe for getting in trouble), and I’m Grateful we stuck it out (we could’ve quit multiple times). I’ve loved creaky old wooden stages, dark theaters and mysterious backstages ever since. Once in a while I’ve got to sing on a few of those and I’m always Grateful for the chance to be up there and to remember the words of an old song I thought I’d forgotten.

‘Consider yourself at home’ indeed…