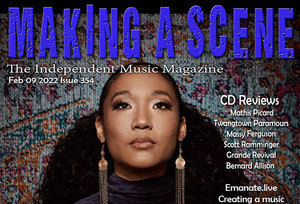 Reprinted from Making a Scene
Written by Jim Hynes – February 10, 2022

The Way The River Goes

Dan Weber’s songs are every bit as strong as the stunning photography that graces both the CD cover and the detailed booklet within, depicting him in various poses, sitting and standing, guitar in hand, in a shallow river.  As he says of his 14 songs, “I found them along rivers of water and asphalt, the current carrying the sediment of my life downstream to a confluence that was years in the making.” While Weber is hardly an overnight sensation, The Way The River Goes, his third album, may well prove to be a breakthrough of sorts.

Weber has a plain-spoken, comforting, but not especially distinctive voice as he delivers these songs, a mix of his lauded work in the folk realm and more rootsy Americana touches.  The river has been the subject in songs forever, but Weber does a nice job of using it metaphorically. He claims that nearly all the songs are about leaving or moving toward someplace or someone. The way he compares the flowing river with the train rolling out of sight in “While You Were Sleeping” is a nice touch in this beautiful ballad.  That one leads into his most acclaimed song “Ever Since Columbine,” the winner of the 2019 Woody Guthrie songwriting contest. He delivers the chorus “Did you hear there was another shooting today?” with the requisite somber tone in his vocal.

“Goodbye New Orleans,” uses accordion and drums to give it a sound unlike the others. This is a lament, raising questions on how the city below sea level will continue to survive through natural disasters. In his liners, Weber paints a desolate description of the infamous Ninth Ward, which barely exists anymore. One can’t help but think “Farewell Maggie Valley” is in some minute way inspired by Townes Van Zandt’s classic “Tecumseh Valley” but instead this one, not nearly as deep in subject matter, is about escaping the Asheville, NC after a show on a frigid night Tony Furtado’s banjo imbues the tune.

”Whatcha Gonna Do?” is an upbeat folk singalong with impressive mandolin runs from Connell while “Never’ is a ballad, with another weather related story about a horrific storm in the Pacific Northwest, another spot for Furtado, this time on dojo.  The standout track “Ghosts of Wichita” carries the intensity and drama of Weber navigating a driving rainstorm on a dark night, only to have the rhythm of the wipers somehow inspire the tune. Again, referencing the liners, here’s another interesting observation – “The song goes out to the guy who told me one night around 3:30 AM that “Wichita” and “Arkansas” do not rhyme in Kansas, but they do everywhere else.”

The fiddle driven “Somewhere Down the Line” is another on the theme of leaving while the ballad “Surrender” is an empathetic plea to find resilient strength (“I will fix your broken wing’). Tempo kicks up with the hoe-down like- “You Make Me Wanna Dance, “written with Weber’s girlfriend Lynn McCracken and featuring the Decemberists’ Jenny Conlee-Drizos on accordion, same one who played on “Goodbye New Orleans.” “Last Night” perfectly captures those decadent parties of twenty-somethings awkwardly seeking love (or at least lust) in all the wrong places, inevitably staying up all night. He dedicates it to all the “Kings and Queens at the breaking of the day.”  “The Sun’s Gonna Shine When I’m Gone” has the flavor of Garcia and Grisman, especially with Connell’s mandolin. “Call It a Night” is his usual set closer in live performance and fits nicely here. There’s a satisfaction and grateful tone, punctuated with David Lipkind’s harmonica. Weber has covered lots of ground in these 14 well-crafted songs. Yes, let’s call it a night and let Dan Weber rest easy. The care and thought that went into these songs is deserving of national recognition.