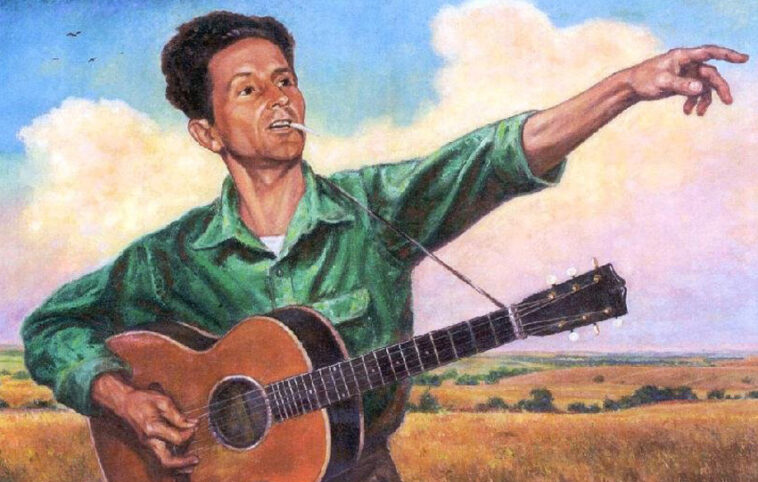 My tribute song to Woody Guthrie—‘Oh Woody’, was chosen as the Winner of the 2015 NewSongs contest at the Walnut Valley Festival in Winfield, Kansas. Also, my song ‘Take a Liking to You’ was chosen as an ‘Alternate’ winner in the ‘Religious/Spiritual’ category. Needless to say I can’t wait to go to Kansas next weekend to play at the festival! Listen to ‘Oh Woody’  or Download ‘Oh Woody’

‘Oh Woody’ also rose to #2 (!!) on the National Folk music radio charts this summer. That’s just Incredible. I’ve always felt such a strong kinship with this song from crowds singing it along with me to the message of the song itself and it’s really great to know that folks are hearing it on radio and really responding to it. Long Live Woody Guthrie!!

I also have a handful of shows coming up closer to home, including a short set at Artichoke Musicin Portland on October 23rd (with Bob Howard, Matt Mesa, & Alonzo Garbanzo) and at the GREAT Seattle Folklore Society series in Seattle on Saturday, October 24th.

And lastly, I’ve been named as an ‘Official Showcase Artist’ at Folk Alliance’s Far-West conference in Oakland, CA and an ‘Official Quad Showcase Artist’ at Folk Alliance’s Northeast Regional conference in Kershokan, NY. These conferences and speciafically the ‘Official Showcases’ are GREAT opportunities to play in front of venues, agents, house concert hosts, talent buyers, etc. so I’ really excited to be able to play them—so maybe, I Ain’t Done Ramblin’ Yet after all…

Speaking of ‘Contests’…during the The ‘Ain’t Done Ramblin’ Yet’ Tour I played in 5 songwriting contests—the Tucson Folk Festival, the Rose Garden Coffeehouse in Mansfield, MA, the Kerrville Folk Festival’s ‘New Folk’ Competition in Texas, the Susanne Millsaps Performing Songwriter Competition at the Utah Arts Festival in Salt Lake City and as an ‘Emerging Artist’ at the Falcon Ridge Folk Festival in Upstate, NY in late July…

I took 1st Place in the Rose Garden Coffeehouse contest (my 1st win!!), 2nd Place in the Susanne Millsaps competition, and was a Finalist in Kerrville ‘New Folk’ (3 times in 4 years!), and in Tucson (3rd year in a row as a Finalist) and the results of Falcon Ridge will be released sometime this winter (finger’s crossed!).

No one I know—including myself—is a big fan of songwriting contests—it’s a pretty weird experience ‘competing’ on what is essentially subjective—songwriting and musical taste. It’s also financially draining, pretty stressful and usually involves a hefty dose of ‘rejection’. Up until now, I’ve won exactly one contest—after ‘losing’ 15 or 20 times. But on the other hand, I’ve met some Wonderful people and so many other talented artists—So on balance, I still think it’s pretty cool to do them and an honor to be a finalist, honorable mention, etc.

As always, I wanted to say ‘Thank YOU’ again for all the support. So many great things are happening in 2015 and every bit of ‘success’ I’ve had has been a surprise to me and I’m just grateful to be able to chase my dream for a while. THE most rewarding part of playing the shows was meeting folks all over the country and getting to know them. I met so many Wonderful people and your hospitality and kind words are what kept me going. It’s as Simple as that. So ‘Thank YOU!’ for Listening, Reading, Sharing, and Helping me make this long, Crazy musical journey of mine possible…I’m really humbled by your overwhelming show of support.

Hey–If you have a favorite local venue you’d like me to play at or would be interested in hosting a House Concert (which ARE the greatest things since sliced bread BTW), shoot me an email, let’s talk!!!

My NEW CD ‘What I’m Lookin For’ has 14 new songs including ‘(I Deal with) Crazy ALL Day’, ‘Oh Woody’, ‘Pretty Good Tonight’, and ‘Do You Ride Horses’ to name a few and several you’ve probably not heard before since I’ve not played them live.

‘What I’m Lookin For’ is my best songwriting yet so I really think you’re gonna love it! You can pick up a copy at my website at Dan Weber Music where there are links to iTunes, Bandcamp, CD Baby, etc.