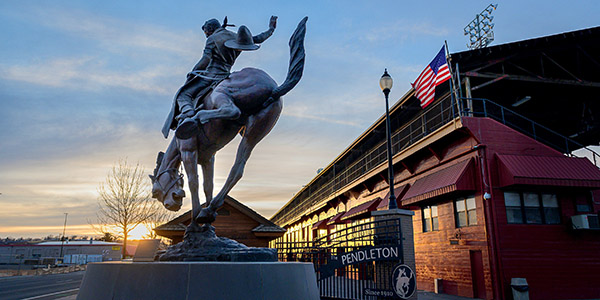 Grateful Blog Day 104: I woke up in Pendleton, Oregon the other morning, the town made famous by its annual rodeo and the woolen mills by the same name. It was a little disorienting since I’d been camping in the desert for several days and had seen or spoken with virtually no one. And suddenly there I was, waking up in a motel with the train roaring by and a complimentary breakfast. I skipped it. I drove around downtown 5 or 6 times. It doesn’t take long and after a few trips around the downtown blocks you’ve seen it all—5 or 6 times. I grabbed coffee and headed back to the motel to pack when I noticed the Pendleton Woolen Mills store. I was wearing my favorite Pendleton wool/down vest. It’s probably the most comfortable and most versatile piece of clothing I own. Its part vest, part coat, part pillow and part seat cushion. Half the time I come in the house and keep it on for another hour; it’s THAT comfortable and frankly, why be cold while the house is still heating up?

So I wandered in and the store was dead at that hour; just me and the sales clerk. She noticed my vest and we talked a minute or 2. Mostly I told her how much I loved it but it was in pretty sorry shape due to a torn pocket and exactly five different tears—the last 2 coming courtesy of some barbed wire I got tangled with a few hundred miles ago a few days earlier. She said ‘Take off the vest, let me see’. I didn’t really think about it, I just did. She saw the damage, said ‘a whip-stitch wouldn’t be pretty but it’d do the trick’ and I nodded ‘uh huh’ as if I had a clue what a ‘whip-stitch’ was. Then she said ‘do you have 15 minutes?’ Yeah sure. ‘Great!’ It what seemed like 5 seconds, she had a drawer open and a handful of spools of thread and various needles on the table and began sewing. We talked a little bit longer but I could see it’d be easier if I just left her alone so I did.

It’s weird, the whole time I had that feeling you get when someone chooses to take over and you let them—like getting a massage. At first there’s an unfamiliarity to negotiate, then some odd warm and prickly feeling in the back of your neck and then the general feeling of well-being when someone unselfishly gives of themselves. I’m pretty sure it’s not in the employee handbook for sales clerks to offer to sew customer’s Pendleton garments right there and then—I’m pretty sure they’re not supposed to fix them at all. And I’m quite certain there job is to sell you anther one. Believe me, I looked. No luck.

So 15 minutes later she was done. Her sewing was efficient (mind you I’m no expert) and she said it was far from perfect but I begged to differ. I walked into the store with my favorite torn vest on, smelling of campfire smoke, and she literally just took it upon herself to fix it. I didn’t catch her name but I want to write the company a letter to tell them how Grateful I was she was working that morning, and how Grateful they should be to have her be the face of their company when she’s behind the counter. Like I said, I’m a big fan of the vest, but now I’m a bigger fan of the company and the fine ladies (and men) who work there. When summer hits before long it’ll get put in the back of the closet but when I pull it out next fall, it’ll be good as new…