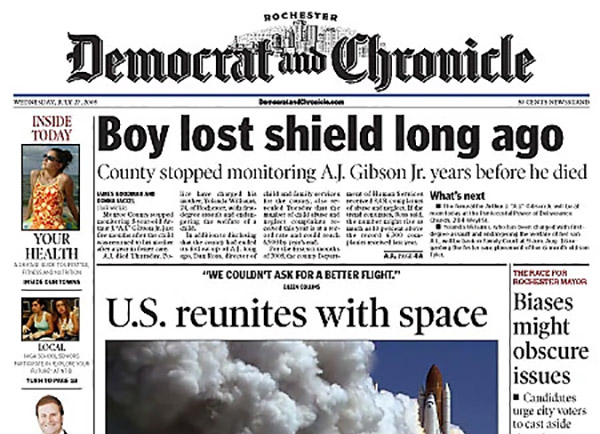 Grateful Blog: Day 61: Woke up to a layer of snow on theRose Citythat fell last night. Snow’s pretty silly here. Everyone goes crazy. The media blows it out of proportion with non-stop ‘Snowmageddon’ coverage. People blow off work when there’s 2 inches on the ground. Kids make snowmen and when they’re done the lawn is green again because they used it all up. And the car dealership looks like the fall ofSaigonwith folks stacked cheek to jowl trying to get chains or their snow tires put on. Growing up inWestern New York, with an annual snowfall of roughly 100 inches, snow was a regular occurrence. I was a paper boy, alternately delivering the afternoon ‘Times Union’ and the morning ‘Democrat and Chronicle’. Generally I did it by bicycle but during the winter I hoofed it on foot, in sometimes waist deep snow, slip-sliding around the neighborhood in below freezing temperatures to get Mr. Ennis or Ms. Renz or old Mr. ’so and so’s paper there on time. It wasn’t that I took pride in it, it was that I got YELLED at if it was late. So every winter morning I’d put 5-6 layers of long john’s jeans and coats on, sling 75 paper’s across my back in y canvas satchel, and get those things delivered, knowing it wasn’t gonna get done any other way.

So this morning, waking to a whole one inch of snow, I got a little grouchy when I realized that somehow that one measly inch kept my carrier from delivering my morning ‘Oregonian’. It’s different of course these days. Kids no longer deliver papers. Adult do it, by car, trying to make extra bucks to make the mortgage or whatnot. Its serious business now and I don’t want anyone getting in an accident delivering my paper. But it’s inch of snow, seriously.

I learned a lot when I was a kid delivering the ‘Democrat and Chronicle’. When I’d go around collecting the money I was owned, Old Mr. Cramer, who always called me ‘Don’, would give an extra 10 cents and say ‘buy yourself a good cigar kid’ which even in 1976 I knew that wasn’t going to happen unless he gave me another dollar on top of it. I learned that some folks will REALLY go out of their way to avoid paying (those are usually the same folks who yell the loudest when their paper is late), and I learned that I hated collecting money, but also that I was fairly good at it, cause it was MY money and I’d trudged through the snow for it. So I was determined and I learned the value of hard work plus determination doesn’t always equal money, but it helps a whole bunch.

I also learned to be ‘Green’ before there was such a thing. I got most of the people on my route to save their newspapers and I went back around and brought them home with me. We FILLED out garage to the rafters with them (Wow, what a fire hazard…why did Dad let us do that???). Then when the price was right, we took them to this greasy, dirty, smelly and eminently fascinating place under this railroad bridge near downtown called Kreiger’s that took those newspapers to recycle them and paid us cash. That’s what I used to get $900 to go to Philmont Boy Scout Camp inNew Mexicowhen I was 13. I saw the ‘West’ for the first time and I’d argue it changed my life because from that point on I wanted to live out ‘West’ when I grew up. I’m still out here, I still love the ‘West’ and I still LOVE northernNew Mexico.

But the thing I remember most about being a newspaper delivery boy was the mornings: The ones where it snowed a bunch the night before. There was an hour of so before the snow plows came by. So it was just me. No cars. Just the newly fallen snow making that distinctive ‘crunch’ underfoot my heavy boots, an occasional lonely wind and the sound of my breathing as I hopped over snowdrifts to get to the front door, where I’d unstuck the know of the storm door, quiet as I could, and slide the paper inside. We didn’t have plastic sleeves for them back then. The thing was, there was this eerie bluish light the snow gave off right before the dawn and the combination of that diamond glistening of the perfectly new fallen snow, the beautiful stillness, and that faint indigo light was intoxicating. I’d stop for a second of two to catch my breath and just listen to the stillness, look around and marvel at how beautiful the world was at dawn, before everyone was up. It was magic and to this day, that half hour of the day, that blue light of dawn is my absolute favorite moments of the day.

So I’m Grateful for many things this morning. For having parents who let me do a job that taught me the value of hard work (and kept me in shape), for learning what other people were like when I delivered and collected papers and money from them. But mostly I’m Grateful because I fell in Love with mornings, a love affair that’s lasted over 30 years. It’s still my favorite time of day to get up, have a little coffee, and watch the darkness turn just that perfect shade of purple right before the dawn. And I still love reading the morning paper—If it’d ever get here…