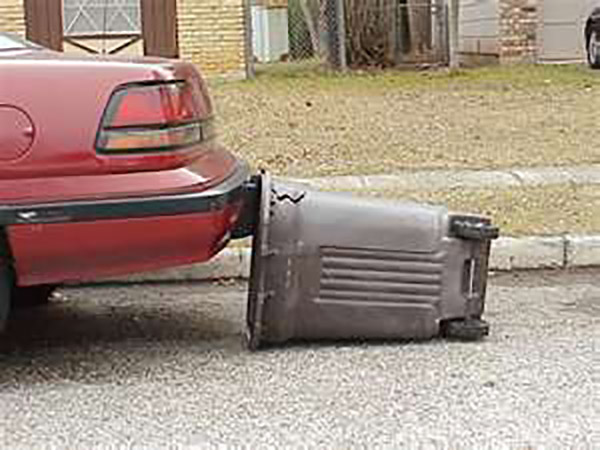 Grateful Blog: Day 59: Today I’m Grateful for my neighbors. All of ‘em. This morning my neighbor across the street, ‘Whitey’, backed up and ran over his garbage can with his Crown Victoria. Whitey’s just a shade over 80 now and his Parkinson’s, poor eyesight and sciatica/back problems are slowing him down. I ran across the street to help him because I wasn’t sure he noticed. When I moved in 14 years ago I was 30 and easily the youngest person on the block. I was surrounded by retirees who’d lived on East ‘Z’ Street (‘EZ’ Street for short) forever. Whitey’s up to 54 years now on the block by my last reckoning. But time marches on. My neighbor Rosie just moved and Inez has been gone since her heart attack for 7 years now. Ed Brown down the block got Alzheimer’s and used to come by every week to chat about this and that, gardening and tools. He’d remind me that his name was Ed Brown (which was nice but unnecessary), that he had Alzheimer’s and that he’d be by again next week. When regretfully, his wife had to move him to a care facility she had a garage sale and I bought Ed’s custom made rack of shop boxes to organize stuff in. It was only partially finished but I saw where Ed was going with it and took pride in finishing it. It’s in my garage now, having merged every spare nut, bolt and odd part in my life with Ed’s extensive collection. I hope someone does the same thing for me some day. I don’t know why, but it’d make me feel better.

Then there’s Richard. Richard was voted citywide ‘Vancouver’s Best Neighbor’ the year he died. When I moved in he came over to say ‘What are you going to do with those dumb trees the so and so planted’? They WERE dumb. Completely the wrong place for those kind of trees and the health of both the trees (and the sidewalk) as well. But I’d been living there oh maybe a week and mumbled something like ‘I’ll cut them down, eventually…’ I came home that same day to find them in a neat pile, cut down, chopped up, and the stumps and roots dug up. That was Richard. Once during the great ice storm of 2003 I had to put snowshoes on be able to walk (without killing myself) 2 houses down to get Richard off his ladder where he was knocking humongous icicles off with a baseball bat. I got him off the ladder just in time to see the very top branch of Whitey’s Norwegian Pine give way under the weight of 10 inches of snow and 3 inches of ice and summarily take down every branch on its way to the ground. The WHOLE tree, all 50 feet tall of it, suddenly had nothing but 2 limbs on it and Richard turned to me and said “I’ve never seen anything like it. It looks like a totem pole. Aren’t you glad you came out to see it?’ I was dumbfounded. I also remember the time I was enlisted to go over and encourage him to get off his roof because he was up there with the garden hose, bent over, with a  hard hat on (God Bless Him), hosing the roof down to get the moss off. He was 77 at the time. And THAT was Richard, in a nutshell.

But back to Whitey. Whitey was a union ironworker for 20 years like my Dad. He worked on building the Dalles Dam and before that he logged the big Ponderosa Pine woods up near Klickitat, Washington. He told me about the summer they first got chain saws instead of hand saws and made a ‘TON of money before the bosses caught on’. He also told me he bought 7,000 shares of Starbucks in 1990 when it went public. It split twice so at last count he had 28,000 shares. It closed today at $48.91. If you do the math that’s roughly 1.37 MILLION in Starbucks stock alone. Whitey can afford any number of Crown Vic’s and probably a couple extra garbage cans.

But the thing is, Whitey’s getting up there and you can’t buy the years back no matter how much you have to spend. I think like Richard and Inez and Ed, Whitey’s had a good life and he’s lived it by his terms. But I get worried now and again because they’re disappearing before my eyes and I know they have things to teach me. I know that not so far off, I’m gonna be one of the ‘old timers’ on the block and somehow it’ll be my job to lead by example like my neighbors always have: To put the flag out for Memorial Day and July 4th and Veteran’s day. To offer a neighbor your mower when it looks like theirs might be broken. To be ready to jump a car when someone’s battery dies, or just to commiserate when a good neighbor moves or moves on.

I didn’t know what to do this morning. I just ran across the street, asked Whitey how he was doing. He said ‘Shit, not so good obviously’ and we both laughed. I then remembered the time I backed out of my driveway, right smack into my wife’s car, also in the driveway, right behind mine. I crushed the front end. Not only that, she was IN it at the time. I thought she’d already backed up but no dice. So I told him that and we both laughed and for a second or two we were just two old neighbors telling stories about stupid things we’d done to make the other feel better about something equally stupid.

Good neighbors are more than that of course and that whole bit about ‘Good fences make good neighbors’? That’s B.S. Good fences just make bad neighbors more tolerable. Good neighbors are the one’s who know your name and take the time to get to know you. They notice when you’re on vacation, offer to grab your newspaper or mail, and offer their lawnmower when you need one or some homegrown tomatoes even when you don’t. There are a hundred other things of course, but mostly good neighbor’s worry a little about each other, especially when things aren’t going so well. So I’m worried about my neighbor Whitey these days. I hope he’s gonna stick around a while, there’s a whole mess of cans to run into every Tuesday morning and I’m game if he is…